Every person possesses a divergent personality and mindset but not going beyond a typical narrow mentality is a different case. Racism is one of the major problems that many citizens face in our society. Although it is strictly banned but as some things can never change, similarly few people kill the humanity by making horrible statements on the grounds of skin color. These culprits cross the extreme level of insulting dignity, respect, equality, and humankind.

Not only grown-ups have to face this discrimination but even children are not spared these days. One of the recent examples of this inequity is the disgusting comments that people wrote for Khloe Kardashian’s baby’s skin color.
A few days back, Kim Kardashian shared a very cute picture of her daughter Chicago, Kylie’s daughter Stormi, and Khloe’s daughter True on her Instagram. As all the three cousins were born within a few months of each other so, she captioned the photo as “the triplets”. Instead of adoring the babies’ innocence some insane people came up with nasty comments on comparing True’s skin color to her cousins’.

Things went so disgusting that Kardashian’s fans took an initiative to speak against such sickening thoughts and gave a nice response to these morons.

Check out the comments here: 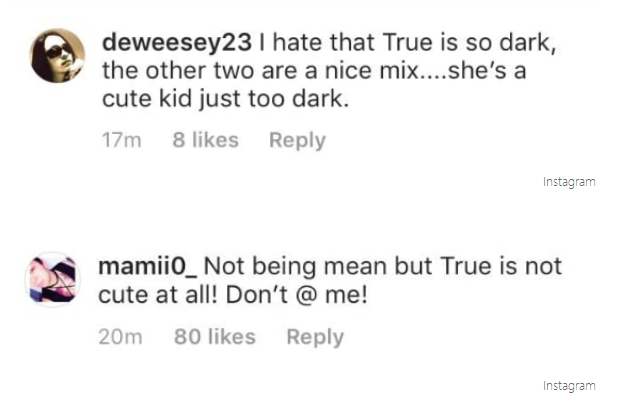 People’s comments against it:

@khloekardashian So sorry you have to see the nasty comments people are posting about your beautiful little angel. I really do feel sorry for you because that’s hurtful and completely untrue and unnecessary. True Thompson is beautiful❤️

It’s actually so vile seeing what people say about Khloe Kardashians daughter. Imagine receiving racist comments about your own child who is 5 MONTHS old.

For those of you who still don’t believe colorism is a thing, do me a favor and go read all the idiotic comments under the picture of Chicago West, Stormi Webster, and True Thompson.

People in the year of 2018 are calling a less than year old baby “Ugly” because she is too Dark.

Last night I showed my mom the cute picture of the Kardashian babies and started to read the comments…wow. People were being so nasty about True and her skin color. Your life really is pathetic if you go online to hate, especially a little baby.

Khloe Kardashian’s daughter is already experiencing colorism at 5 months old….think about that https://t.co/cibI5LcdAw

Facts and myths about chicken pox

People are Talking about This School in Iran